The two of you share something unique, something nobody else can understand. Maybe it makes you two a little hard to relate to, and being part of a "team" seems a little superfluous - aren't you a team by yourself? Sure, neither of you could do this alone. But that still makes you twice the hero anyone else is.

The Host/ed is a playbook for Masks: A New Generation. It's on the face of it a playbook for playing a hero and a symbiote, like Venom, or any two-in-one conjoined entity, like Firestorm, or Witchblade. Unlike other attempts I've seen, this playbook is an attempt to capture the agency of both entities involved, the host and the hosted. It's also a playbook about discovering who you are in relation to another person, and finding power (and vulnerability) in that.

The Host/ed is a playbook by Ben K. Rosenbloom for the game Masks: A New Generation. It requires that game to play, and can be purchased from Magpie Games here. Major mechanical inspiration from the Pair, from Fellowship in Rebellion by Liberi Gothica Games, which can be purchased here.

Includes a laid-out playbook for use at the table as well as a few notes on tricky moves and tips for GMs. Also includes a playbook with alternate art, for anyone who's put off by the body-horror implied by the original art.

As written, the Host & Hosted are not literally plural characters (that is, they are not alters or different identities of the same person). But it would be disingenuous to claim that that’s not a powerful or valid reading of the fiction. Take care not to represent the Hosted as “evil” or stigmatize their existence,  and please be mindful as you play of harmful tropes around dissociative identity disorder. In particular, I think it’s important to treat both the Host and the Hosted as true and individual people, each with their own agency. It’s always a good idea to make sure everyone in your group is comfortable with the character and themes you’re looking to explore! 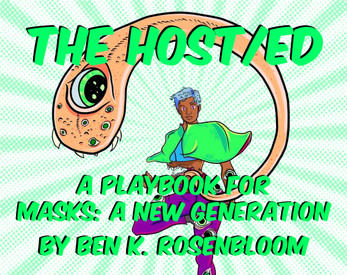 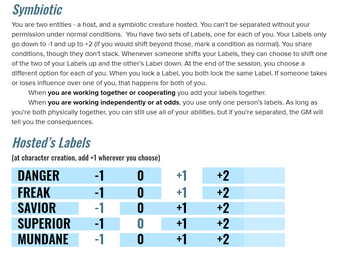